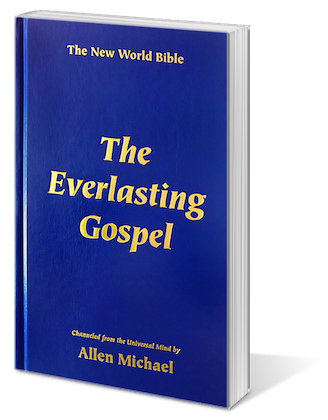 “The Everlasting Gospel – New World Bible” is unlike any book that has ever been published. For the first time in Earth’s history, this book tells of the energy separation that occurred in this Solar System, destroying the Planets and leaving 24 billion entities spaced-out. To retrieve these beings, this planet was prepared for them to incarnate into time bodies, lifetime after lifetime, to reprogram their etheric bodies through a facsimile experience to come back into the knowing of the Universal Mind and once again, to manifest in their eternal bodies.

The message to act on, coming through the Everlasting Gospel, is simple: the one cause of all the conflicts on this planet, including war, crime, disease and poverty, is in the way people, as one humanity, provide the necessities of life for one another. Rather than value being on basic needs, it has been placed on money and property. When rightly used as a medium of exchange, money is a means

of distributing goods and services. But now it has been perverted with usury and taxation, and become a means of getting for self, where the rich get richer and the poor get poorer.

The answer given in this book is equally simple to grasp and perfectly clear: Share all things in common as one humanity, all in service to one another.

“No book has ever defined the goals for all the people other than this Everlasting Gospel. Its spirit mind reaches into the unlimited dimension of absolute freedom, security and abundance for all people, and gives every person the right to have unlimited use of the whole planet and all its facilities on a sharing basis. All of this is accomplished through an autonomous self-government. No political or scientific group can combat this ultimate idea, They can only use their limited thought to attempt to contradict it.

The Holy Books, poems, songs, and inspired literature that enlightened souls have channeled down through the ages from the Universal Mind, have given the prepratory knowledge for earth people to come into Creation’s Kingdom of God being established here.

Now, Creation gives its absolute and unlimited vision to all people who make the effort to get de-hypnotized from old establishment thought suggestion, which has bound the consciousness of the people in the insipid mediocraties of the work-a-day world and the political and intellectual/ scientific world. This now will have to convert itself over to the real kind of truth that makes us free.”

The present consciousness of the people is in duality and is controlled predominantly by alpha or beta energies, corresponding to the two economic systems of capitalism and socialism, rather than synthesizing right and left brain thought and thereby opening up to gamma head chakra energies in the mind-over-matter consciousness of giving and recieving. Now is the wonderful time for this Idea: that there is One Mind, One Universe, and that we are all part of Nature’s Creation.

This change in consciousness will come about automatically when we eliminate the system which causes us to repeat, generation after generation, the old usery/ taxation money game of getting-for-self – where the workers, craftspeople, designers, builders and artists have to work to make money to buy back what they have produced. The less skilled work in useless, superficial back-breaking jobs provide no real services for anyone. They simply perpetuate the system that is controlled by a small minority who do nothing to provide the people’s needs, and instead shuffle papers with weights numbers and measures to maintain their control over the people.

The only useful, meaningful endevours people are into are the ones that provide us with our food, clothing, shelter, care, recreation, transportation communication and utilities on one high standard, for all people. Those are the necessities of life that everyone must have for a full creative life on this planet. This is the Idea whose time has come, and which has been channeled thru Allen Michael from ETI (Extra Territorial Intelligence) contained in the Everlasting Gospel series.

It begins with a Worldwide Work Stoppage.

The Worldwide Work Stoppage means that we keep only the necessary services and supplies going (our karma yoga exercise) and stop the superfluous status quo jobs that provide nothing of real value. For 30 days, half the people can go on vacation with their families, recreate and rehabilitate, with all their needs provided by the other half, who with their families, are having the most fun they’ve ever had on this planet in creative endeavors to produce all things needed and wanted on the highest standard possible for everyone. Then, they trade places, and for the next 30 days, those who were served will serve.

“Free Cash Flow Money” will be issued to implement the initial means of distribution and supply, but will no longer be needed as soon as the means of fulfilling the necessities on a worldwide basis has been implemented. The natural flow of Creation will begin to order the giving and receiving automatically and naturally as people come into the gamma energy consciousness (all for one and one for all) thru the doing.

There are no persons or groups to blame, no good guys or bad guys, on this consciousness-evolving planet. All things are relative to each other, and have been a necessary cause-and-effect learning experience for entities incarnated here who, thru money-atonement, have developed the science and tecnology and are now ready to come back into the recognition of the oneness with the Universal Mind — Creation God. We are microcosms of the great macrocosm, and the Universal Mind fills all space. We are as radio-TV transceivers, telepathically giving and receiving communications. Depending on the activities we are into, we are either engaging in mortal- minded duality based on the recordings of the space and matter atoms of the territory we’re in, or we are in First Cause and serving in the joy of doing, receiving communication from the God-Mind and channeling the high truth of the Synthesis. When we become aware of the duality of the consciousness recorded here and the pros and cons playing through our headset, we then can speak and act only on the Synthesis.

By simply reading The Everlasting Gospel – New World Bible, you are opened up to the Godmind that is being channeled thru the New World Comforter.

In the beginning was the WORD. So let’s get it on and spread the word.

It has been over 40 years since a group of us dropped out of the old world of duality and buying and selling for personal gain. We joined together to live as a communal family, sharing all things in common. These experiences and revelations are based on my wonderful days at the One World Family Commune.

Allen Michael: An Enlightened Being